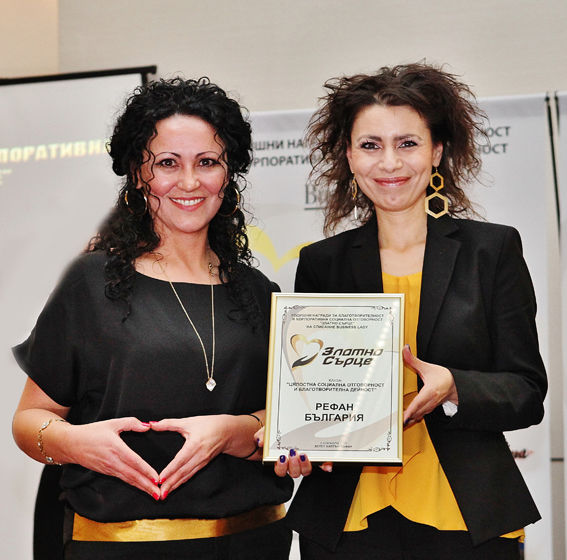 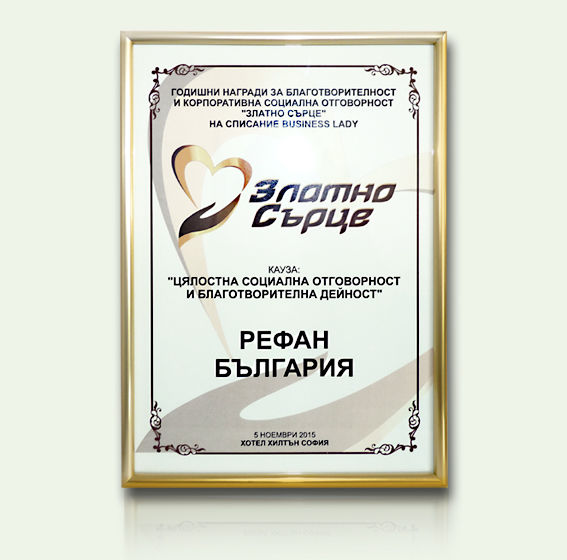 For a second time at a ceremony at the Hilton Hotel presented the annual awards of 22 charity projects and social initiatives that did not allow economic and political crises overshadow the goodness in them and found the strength, energy, time and money to make to somebody else something good.

The awards "Golden Heart" for charity and corporate social responsibility of the magazine Business Lady are public and emotional enterprise, through which says "huge thank you" to businessmen with big hearts.

Company "Refan Bulgaria" was once again honored for its gooding and deservedly took the prize in the category "Overall social responsibility and charity" for its contributions to numerous health, cultural and social campaigns to support various educational and sports initiatives.

This is another award for REFAN, supported many causes of social and socially significant nature, which became the cosmetics firm example for other companies to get involved in such initiatives. Some time ago Plovdiv Municipality said that the charity of REFAN is "of great importance because the medium-sized company assumes social responsibilities inherent in companies with much larger financial capacity."

The company is one of the most socially responsible in the country - has supported more than 500 sporting, social, cultural and health initiatives, and only in recent months has sponsored 44 events in the social sphere, 21 events in 21 sports and cultural initiatives.

The President of the company REFAN Angel Popov has won prestigious awards such as "A Benefactor of the Year", won the award for gooding "Dimitar Kudoglu" , won the prize 'Little Prince "for his contribution to improving the lives of children with autism in Bulgaria, the badge of honor "People with good hearts" and others.

"Refan Bulgaria" received the prestigious award for "Overall a socially responsible policy," because of the extremely active work in favor of sport, art, health, culture and charity. This is another recognition for "Refan Bulgaria" - a leading global brand that 25 years produces high quality cosmetics, and with over 400 boutiques in 28 countries on 5 continents, more than 2000 products and unique franchise business model has become a business card of our country.

In such moments we ask ourselves what is more important - successful business policy of REFAN, or its great socially important charity, which again brings positive emotions for thousands of Bulgarians.