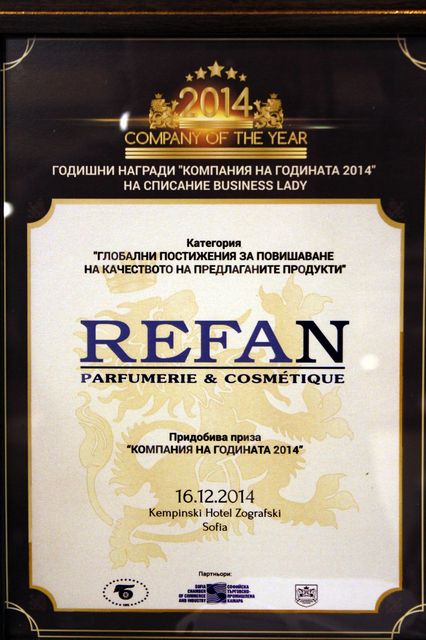 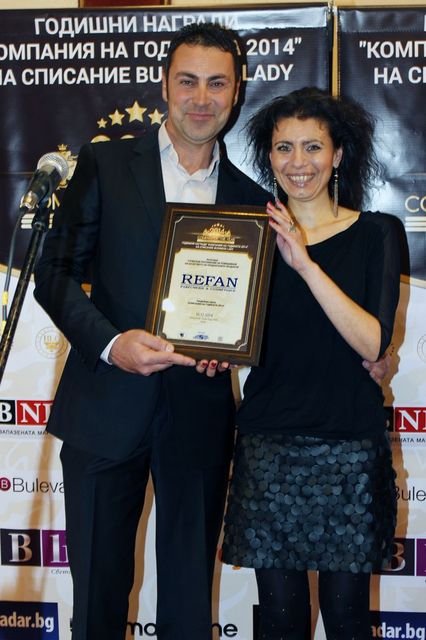 After the most prestigious European Quality Award from Paris, from Global Trade Leaders’ Club, “Refan Bulgaria” has also been recognized in dignity at the First Annual Awards  “Company of the Year”. The “Business Lady” magazine, in partnership with the Bulgarian Chamber of Commerce, the Association of business experts in Bulgaria and the Association "United Business Clubs"  gave out its annual awards at a grand ceremony in Kempinski Hotel  Zografski . The supreme honors “Global achievements for improving the quality of products”  was received by Refan – a company that has developed more than 2000 products on the basis of natural formulas, and glorified Bulgaria both with its production and with its activity for stimulating small and medium businesses by creating the franchise model, recognized on national and global level.
For a quarter-century anniversary “Refan Bulgaria” has proved to be the business card of our country and gave to hundreds of enterprising people in Bulgaria and throughout the world,  the chance to develop a successful franchise business.
Nowadays the company has to its credit  more than 400 boutiques and 1500 sales points in 28 countries on 5 continents, thanks to the innovative and flexible business models which it offers.
Refan is a winner of numerous national and international awards, as well as of the award for the Best Bulgarian franchise in Europe, for  imposing  of a successful franchise model that offers recognizable products of world quality.
The prize “Company of the Year “ is another recognition for 2014 for the overall activity of “Refan Bulgaria” which received the award in the presence of 150 representatives of politics, economics and business.