“Refan” with “Forbes” for contribution to the development of the family business in Bulgaria For the third following year the most prestigious business awards in the world “Forbes” were given in our country on an official ceremony in “Sheraton” hotel. 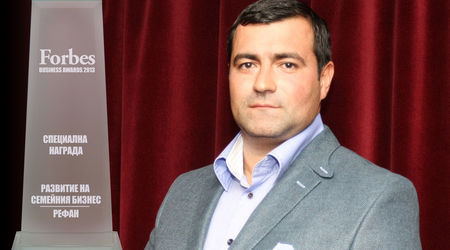 For the third following year the most prestigious business awards in the world “Forbes” were given in our country on an official ceremony in “Sheraton” hotel. For the first time a special award “Forbes for a development of the family business” was given to cosmetic company “Refan” -one of the most flexible employers, which gives a chance for a successful work of more than 2000 Bulgarian families only in the country.

Refan that began its business with a 16 square meters family store in a Plovdiv neighborhood , now has the best conception for family business with a low investments, with products on a global level and prices adapted to the Bulgarian consumer-said infront of the media Angel Popov-president of Refan.-Thousands are the Bulgarian middle and small entrepreneurs, who use the developed and approved business model of Refan and generate good income, as with minimum funding create working stands and boutiques, offering branded and recognizable perfumery and cosmetics with great quality “.

Let us recall that the popular and beloved brand has also won the awards “ Working franchise model” and “ New business model” for supporting the family business on franchise base. The franchise principle, offered by “Refan” is a cheap maintenance which leads to fast and high return. The company increases its market presence, supporting the enterprising small and medium sized businesses in the country with company equipment, initial supplying with goods and training the staff.

The award “Forbes Business Awards” is yet another recognition for “Refan”.